From the last three years, Nash Grier and Taylor Giavasis are having a healthy and prosperous relationship. Their loving connection was officially announced by Grier in 2016, with a twitter post. During an online video of Grier interviewing Giavasis, she admits that during studies she wants to be a Doula (one who helps pregnant women during and post pregnancy). The couple captures great attention after a video of Giavasis hinting to her pregnancy was posted on Instagram, during 2018. However, Grier later clarified that she was not pregnant and the couple is sharing a great relationship.

Who is Taylor Giavasis?

Is Nash Grier having a Kid?

Yet, it’s not sure that his girlfriend is pregnant or not.

Previously, a story was swirled at media that he loves a mystery girl that lives in his neighborhood. But, yet, no one knows that who was the girl and when he ended up this realtion.

No doubt, Princess Lauren is his co star of Vine videos. That’s why not sure that they were just friends or more than this. 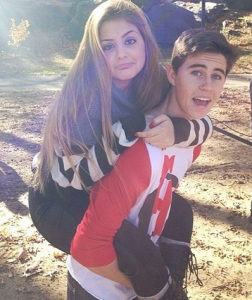 He was born ‘Hamilton Nash Grier’ in 1997 in North Carolina to Elizabeth Floyd and Chad Grier. His father Chad Grier is also his manager. He has two brothers, an older brother Will Grier who is a footballer and Quarterback for ‘West Virginia Mountaineers’ and a younger brother Hays Grier who starts working with him by posting vines and still working along with him. He also has a younger half-sister Skylynn with his foster father John Floyd.

He is an Internet Personality, who also worked in Television and Films. He started off by posting online vine videos with his brother in 2013 and soon attracts popularity. After a fresh vibe of popularity, he joined TV show ‘Magcon’ in 2013, where internet personality meets their fans and interact.

Later he left ‘Magcon’ in 2014 and moved to Los Angeles for better opportunities and there he expands his horizons and pursue the career in acting, direction, app development, and game development. He also finished his high school through online schooling, during that period of time. He famously collaborated with ‘Aéropostale’ to help them develop their online sale solution. He is also featured in few movies and TV series as actor and director.