Unluckily; all the three marriages of Jodie’s were going over with divorce. By the age of 20, she tied the nuptial knot with Shaun Holguin. Shaun was a police officer. Their relationship ended up after four years on September 6, 2006. A year later, Jodie encounter with Cody Herpin. Soon the couple began dating and within a couple of months, they married on July 14, 2007, in Las Vegas Nevada. The couple shared a daughter named Zoie born in 2008. In 2009, Jodie made a petition for her separation from Cody. Eventually, on April 20, 2010, their divorce procedure was finalized.

When her divorce procedure was completed, she declared that she was pregnant from her boyfriend Morty Coyle and in 2010-end she gave birth to their daughter and named her Beatrix. The couple intended to get engaged in January 2011 and followed by this married on March 15, 2012. They separated in 2013 but the legal process of divorce was finalized in 2016.

In 2016, Jodie’s and Justin Hodak’s engagement news was spread in the media like a fire. On March 24, 2017, the news of their separation was circulated in the media.

Who is Mescal Wasilewski?

Right now, his only identity is Jodie Sweetin’s current boyfriend. Hopefully, soon his profession and some other additional stuff will reveal in media. 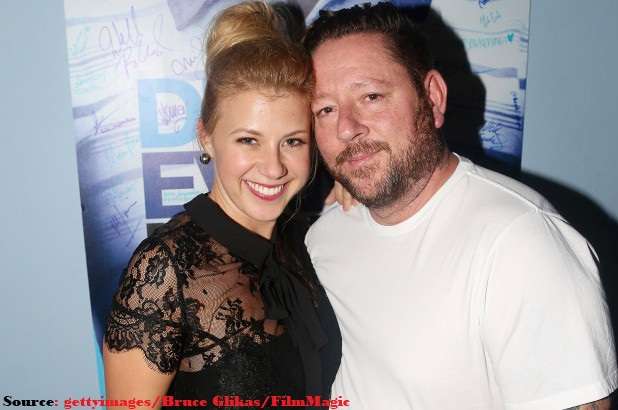 After covering the unfortunate relationship life of Jodie, further, check out her brief bio and career detail as well.

This blooming star of the industry was born in Los Angeles, California, US as Jodie Lee-Ann Sweetin. At the time of her birth, her parents were in prison. Hereafter, her upbringing was done by Uncle Sam and her wife Janice. At the adoption time, Jodie was of just 9 months old but the legal adoption was given when she turned 2. She has no siblings. She completed her education from Los Alamitos High School in 1999 and then Chapman University.

Jodie was a born-actor. In the early days, her relatives induced her to meet agents. At 4, she was seen in the advertisement for a hot dog and then she worked in sitcom ‘Valerie’. In 1987, she was spotted in ‘Full House’ as Stephanie Tanner and gained huge fame, in fact, her entire career was doled out because of that performance. Later, she hosted a show ‘Pants-Off Dance- Off’. She gained a role in award-winning series ‘Small Bits of Happiness’. In 2009, she showed up in two movies ‘Port City’ and ‘Redefining Love’. To date, she has acted in a number of super hit TV series.