Elizabeth Olsen Boyfriend 2021 Husband or Is She Single

Elizabeth Olsen is possibly dating a musician Robbie Arnett from the year 2017. Arnett is a band member of a music band named ‘Milo Green’. Olsen and Arnett are spotted quite often since 2017. In July 2018, the couple was seen at the beaches of Mexico, spending a good time and enjoying each other’s company. Before Arnett, Olsen was in a relationship with actor Boyd Holbrook from 2013 to 2015. The relationship was quite serious and the couple got engaged in 2014 but broke up after just one year. Robert Boyd, who is an American actor blamed Olsen for the breakup.

During an interview with a magazine ‘Man of the World’, he told that Olsen broke up with him on a phone call and that was done on the same day when one of his best friends ‘David Armstrong(photographer)’ was died.

Elizabeth Olsen has also been rumored to date English actor Tom Hiddleston and Swedish actor Alexander Skarsgård in 2011-2012. When Olsen was once asked about her alleged relationships during an interview, she called them mere rumors and added to say that she has been hooked up with a lot of boys if meeting someone is a date.

She loves to keep her love life secret and never admit any of her relationships, not even with the Boyd Holbrook whom she was apparently engaged.

A picture with Ex: 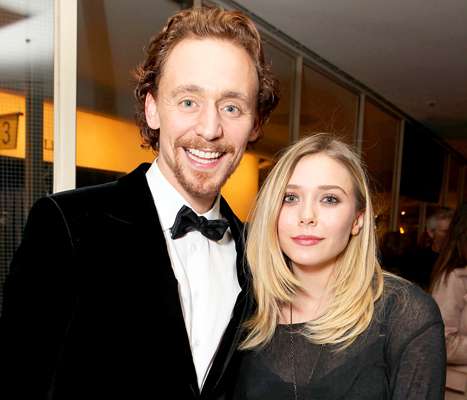 She is an American actress born in Sherman Oaks, California to Jarnette(a personal manager) and David Olsen(a real estate developer). Her elder twin sisters Mary-Kate Olsen and Ashley Olsen(famously known as Olsen twins) are fashion designers and former actresses, who has a clothing line ‘Elizabeth and James’ which is named after her and her brother. Her parents divorced in 1996 and she has 2 half-siblings from her mother’s second marriage.

She began acting at a young age in 1994 with the television show ‘How the West Was Fun’. After which she continues pursuing her career and has completed 19 movies alongside some television series, which also includes some great movies like Godzilla, Avengers and Captain America. Alongside her acting career, she also completed her graduation from New York University which must make her more mature.