Nina Dobrev Boyfriend 2021 Husband: Is she Engaged or Married in a Relationship

Nina Dobrev is seemingly to be in a relation with Shaun White. Whereas, she enjoyed life at its full and always follow her dreams. It is therefore expected that soon she may get engaged. Before this, she dated actor and producer Glen Powell during the year 2017. Their dating didn’t survive much and they ended by November 2017, apparently because of professional commitments. Dobrev dated Austin Stowell from 2015-2016. The couple made their first public appearance in June 2015 and then seen together at social media, vocational trips, and other places. However, they could not help their relationship to last even a year and ended up in early 2016.

Other Relationships of Nina Dobrev:

The year 2014 was all high for Dobrev when she was linked with many actors. She was linked with Derek Theler, Chris Wood, Orlando Bloom, and James Marsden but these all seem like brief hookups which came out to make news only.

She was in a relationship with Ian Somerhalder from 2010 to 2013. Somerhalder was her co-actor in ‘Vampire Diaries’. The couple public their relationship in 2011 but their breakup in 2013 was a shock and nothing much was said about it. However, there were no big issues between actors that’s why they are still friends. Dobrev recently came up saying in an interview that she shares a totally comfortable relation with Somerhalder and his wife Nikki Reed.

Is Nina Dobrev in a Relationship 2021? 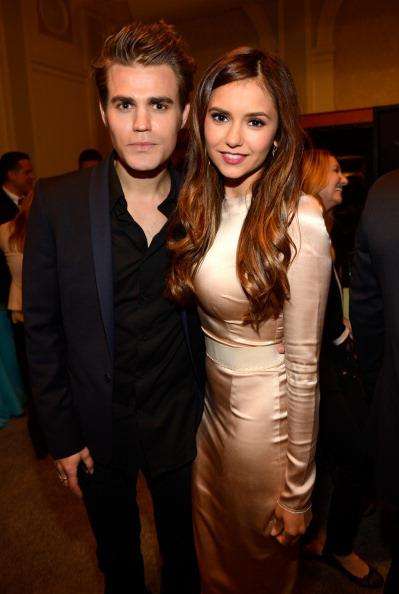 According to ‘US Weekly’, Dobrev met dancer Derek Hough through his sister and her best friend Julianne Hough during 2013. The two dated briefly for only 6 weeks but still, they share a comfortable relationship.

She is yet Unmarried.

Evan William(actor) met Dobrev at the sets of ‘Degrassi’ in 2009 and apparently, they start dating from then and after dating for a year they ended up smoothly.

Actor Ben Hollingsworth also dated her apparently for 3 years (2006-2009), before she made her mark in Hollywood. Nothing much is known about the relationship and they also brought nothing to the public.