John Daly, who is matchless in every field of life, be it the golf career, restaurant business or any other difficult circumstance of life. But, his personal life has always been shaggy which used to inspire controversies and pain for him. He married four times but failed to keep them intact until the time he met her current fiance, who he has accompanied longest (more than a decade). That relationship speaks of his sportsman’s spirit that he never felt aback by a series of bad experiences in life and eventually turns it to success.

Although Daly’s life is an open book; but a less is known about her Fiance Cladakis except that she was working for Hooters. Furthermore, recently, she alongside her brother and Daly appeared in an episode of ‘Bar Rescue’ at Spike Tv. Where we came to know of her father’s business and some other stuff.

Who is John Daly Married to Now? 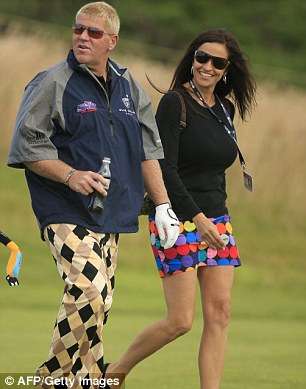 No doubt, John Daly has made a great name of himself in the game but was also surrounded by controversies throughout his life, whether it was Health issues, Gambling, lawsuits, political affiliations or marriages.

Talking of his marriage controversies, he was famously charged to severely assault his second wife in 1992 but the case was not pursued by his wife. Later in 2007, he charged his fourth wife of attacking him with a knife in the night, post a fight in the evening.

Those were the two major incidents depicting his bad marriage experiences but such heartbreaking incidents didn’t let him down and he continuous to strive for true love after four failed marriages and found it in shape of his current Fiance Anna Cladakis. Daly and Cladakis are together for more than a decade now, which is the longest companionship Daly has ever served in.